Archive for the ‘announcements’ Category

We've just rolled out a few changes to the website:

You may notice that the name of the Angry Words design option has been changed to Aworded (since the game was renamed). The Droid Words and WordWise game apps are no longer available, so we've also removed these design options.

29 September 2011
We have received a lot of interest in Scrabulizer's potential to analyse other word games such as hangman, specifically Zynga's popular derivation of Hangman called Hanging With Friends.

Scrabulizer can now help you solve and select words for Hangman and Hanging With Friends.

Use our Hangman Solver to find the missing letters. Enter the pattern, and what letters you have already tried and Scrabulizer will report on the probability of each remaining letter and possible words.

Use our Hangman Word Selector to choose words for your opponent to solve. Enter the letters you have available to make a word out of, and Scrabulizer will tell you all the possible words, and how difficult they are to guess.

Hangman involves revealing a hidden word by guessing its letters in as few attempts as possible. The usual approach is to start by guessing the vowels, they're pretty common after all. If you can know all the possible remaining words, and therefore all the remaining letters, it is possible to cheat the system by using the most likely letters first and solving the word quickly. Right? - Well, usually yes.

This is where strategy comes in. When choosing a word for your opponent to reveal, you want to pick a word that is going to take them many failed attempts. This means choosing obscure words with statistically unlikely letters. Suddenly the better strategy for picking letters is to pick the least common letters.
Eventually, as players gauge the strategy of their opponent, they adjust their own selection criteria until neither opponent has an advantage. So use these tools wisely and you might just cheat the system.
Posted by Dave Wood in announcements | 4 Comments »

A new fresher looking site design was launched this morning. We hope you all like the new appearance. It may seem like some of the buttons are missing, such as "Clear Rack" and "Clear Move", but don't worry, they've just been integrated differently:

A clear rack button will now appear to the right-hand side of the rack, but only if there are tiles to clear.

The clear board button is now at the top right-hand corner of the board.

The "Game Design" button, and the "Show tiles left in bag" link have gone, but we've added them to their own tabs above the solutions list.

We've just added support for three new games and one dictionary to the site. You can now use Scrabulizer for your DroidWords (Android), Wordsmith (Android) and WordWise (iPhone and Android) games. Wordsmith uses "Yet Another Word List" (YAWL) for its dictionary, so we've added that too.

To use one of these new games (or any of the other existing designs), just select it, along with the dictionary, using the options above the Scrabulizer board. You can also set your default game design and dictionary by editing your profile.

We'll be releasing an update to our iPhone app soon to add support for the new games and dictionary. If there are any other games or dictionaries you'd like to see added please get in touch.

Many of you have been asking, so we've now added support for Wordfeud to the site. This means that you can now use Scrabulizer to find the best scoring moves for your Wordfeud games without having to customize the board and rules yourself.

To solve (or cheat at!) a Wordfeud game, just select the Wordfeud option from the drop-down list of designs above the board and then pick TWL or SOWPODS as the dictionary (only English Wordfeud games are supported at present - use TWL for American English and SOWPODS for international English). If you would like to make Wordfeud your default design, you can do so by editing your profile.

Scrabulizer now supports six different games: Lexulous, Literati, Wordfeud, Words with Friends, Wordscraper as well as regular Scrabble. Please do get in touch if you would like to see any more added. If there is a game that we don't yet support, or you just want to change the rules, you can also pick the Custom design option.

Finally, we would just like to thank Sassmo and Nate who helped gather all the information we needed to define the Wordfeud rules.

We are pleased to announce the release of our new Scrabulizer Importer extension for Google Chrome. We've had a Firefox extension available for some time that lets you import your Lexulous and Wordscraper games, saving you the pain of having to enter games yourself. If you use Google Chrome you can now import your games too.

You can install the extension by visiting our Google Chrome download page and following the easy instructions. Once installed, a Scrabulizer icon will appear in the Chrome address bar when you are playing Lexulous and Wordscraper games on Facebook and Lexulous.com email games. Click on the icon to import the game into Scrabulizer.

If you don't already have Chrome installed, you can download it for free from Google.

17 September 2010
Version 2.0.0 of the iPhone application is now available on the App Store, and as a free update to those who have already purchased it.

This latest version introduces the much awaited image recognition, to let you load a game straight from an image, in particular screenshots taken of another application. 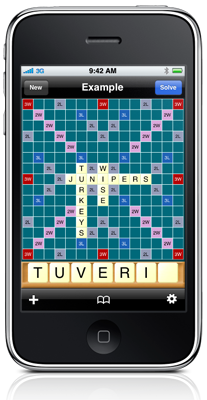 4 January 2010
We've been receiving a lot of interest about whether a Scrabulizer mobile application will be made available, in particular for the iPhone. The answer is that we're working on it.

We want to give you something that you'll really enjoy using, and we know that nobody likes the often tedious task of entering letters into the board. That is why we gave you the Firefox plugin. So for the iPhone we're doing something a bit special. We have created a technology to read a Scrabble board from a camera, similar to how cameras read vehicle registration plates. The idea is that you'll be able to enter your Scrabble board simply by taking a photo of it using the phone's built-in camera.

We've now started to build an iPhone application around this technology, and the good news is that it has been designed to work on almost any phone, so we hope to eventually release versions for other phones too.

It's too early to be able to suggest when it may be available, but we'll likely run beta testing prior to public release. If you're interested in updates, or being a beta tester then keep an eye on our new Twitter feed for previews and early news.
Posted by Dave Wood in announcements, mobile | 7 Comments »

However, if you don't use Firefox or want to use Scrabulizer with the Lexulous live game, then you've been stuck with entering the bonuses and tile scores manually. Help is now at hand - next time you go to Scrabulizer you'll see a Load Game Design drop down box allowing you to change to a Lexulous or standard Wordscraper layout. You can also set your preferred game design by editing your profile.

If you have your own custom design that you'd like to reuse in a new game, then you can now do this using saved games. In the list of saved games you'll now see a Use Design link under each game. Click this to load in just the design from the game without the tiles on the board and rack.